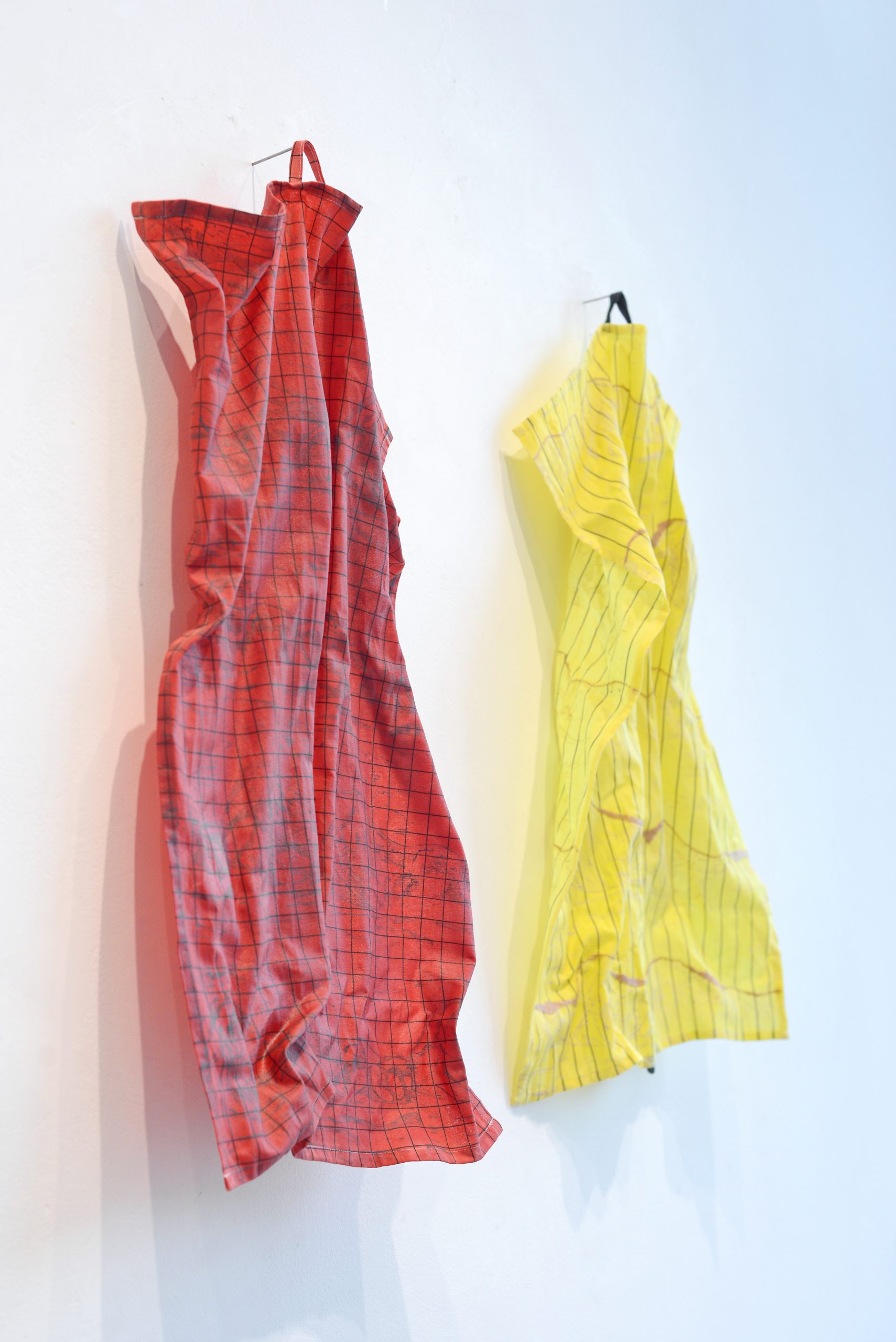 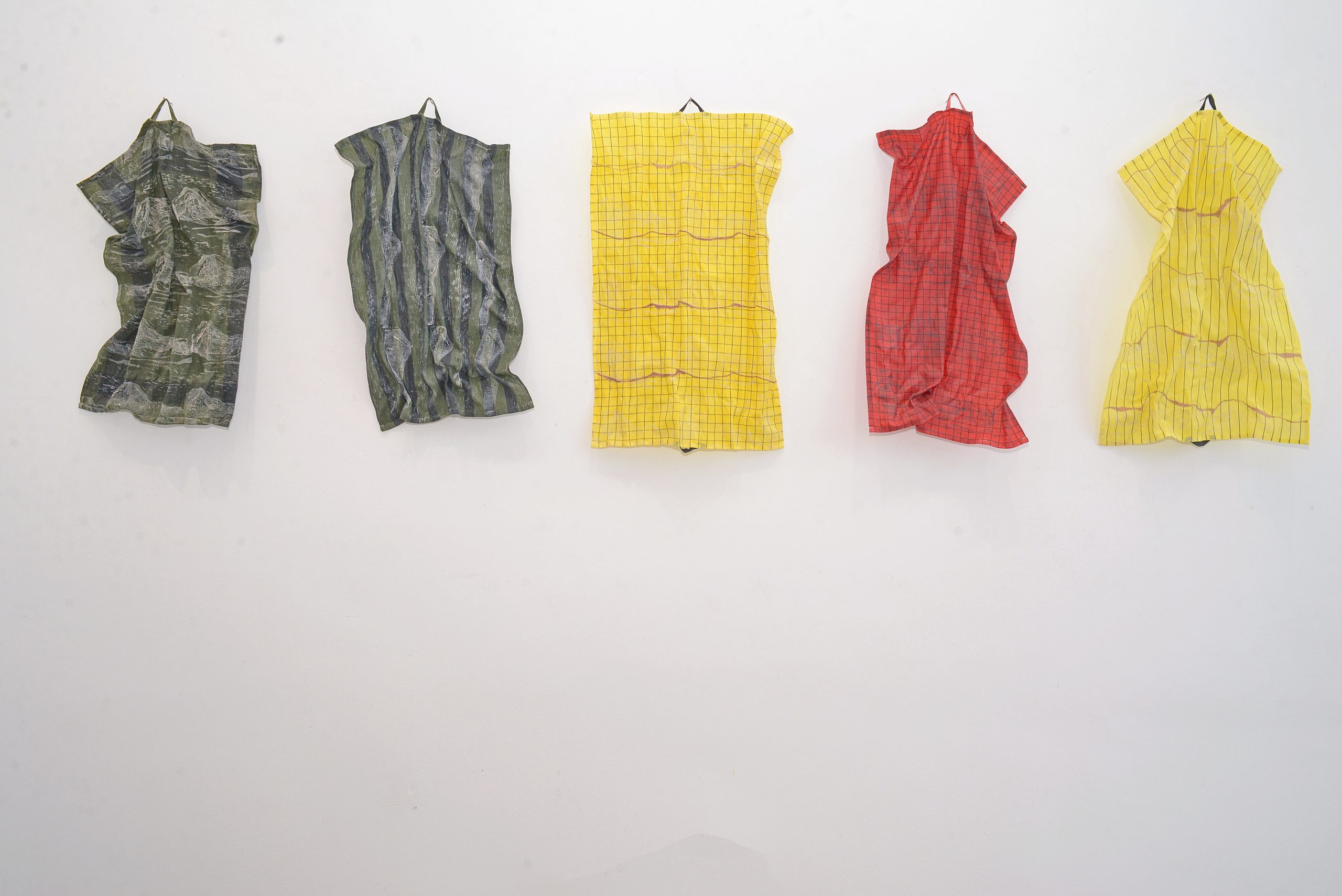 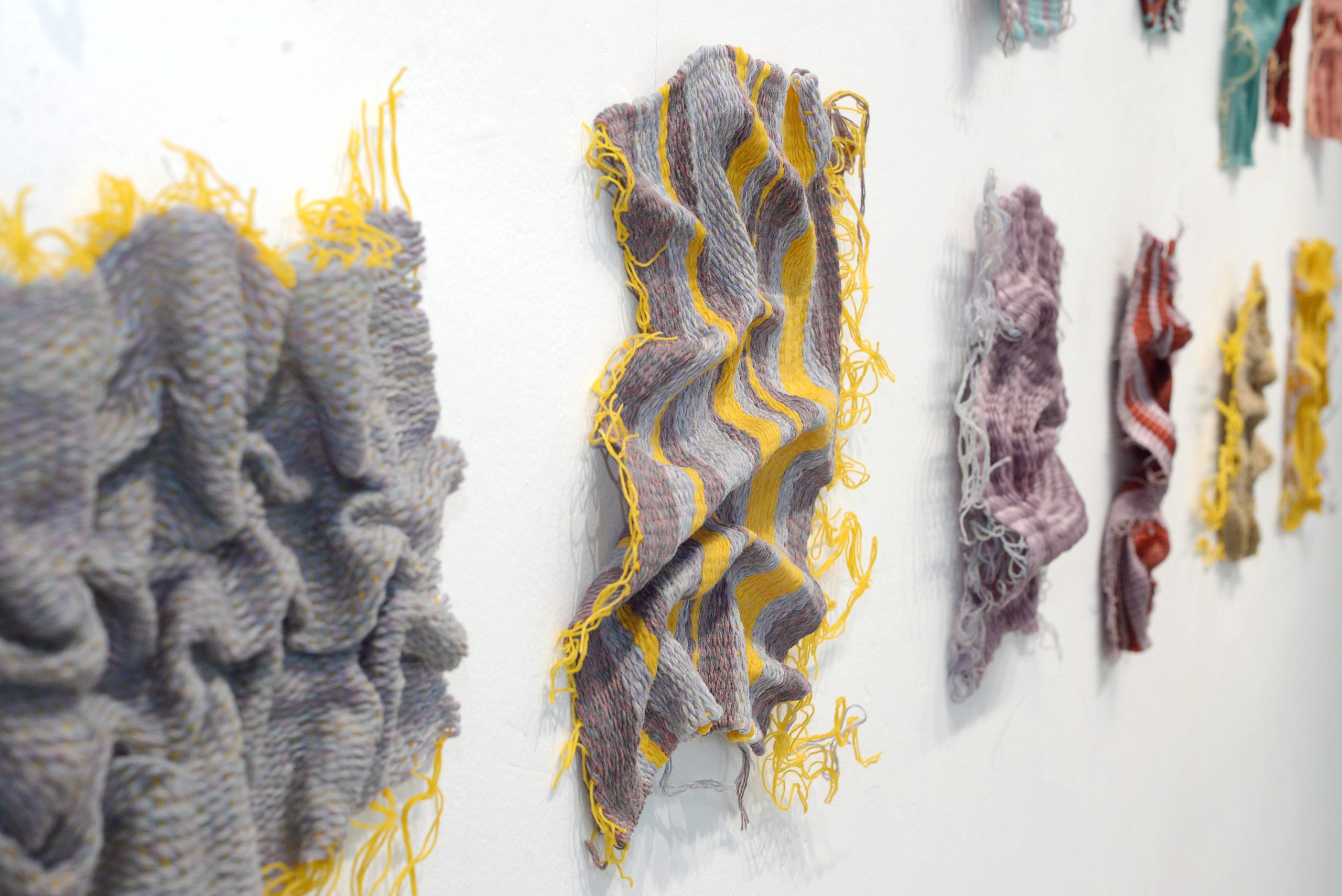 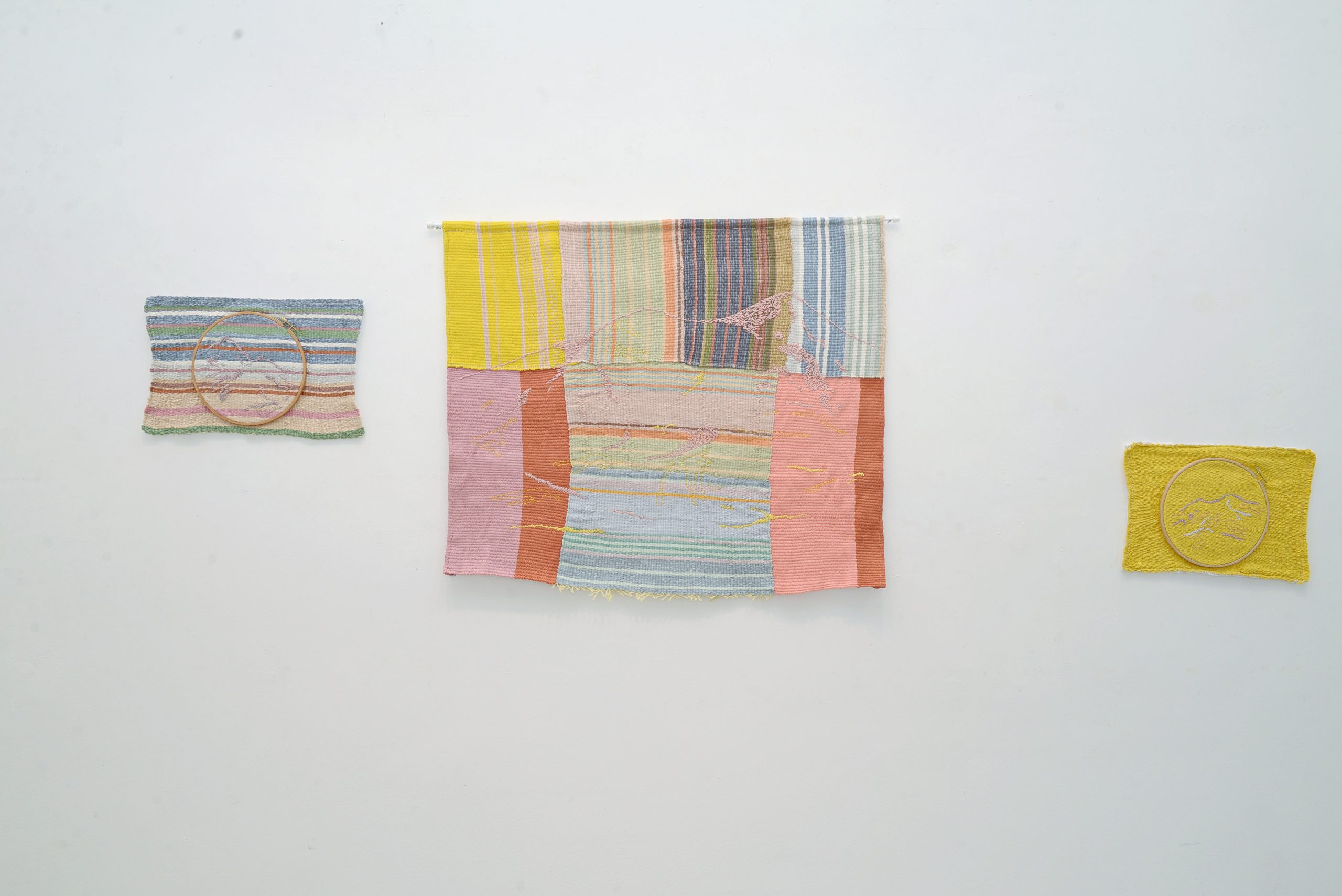 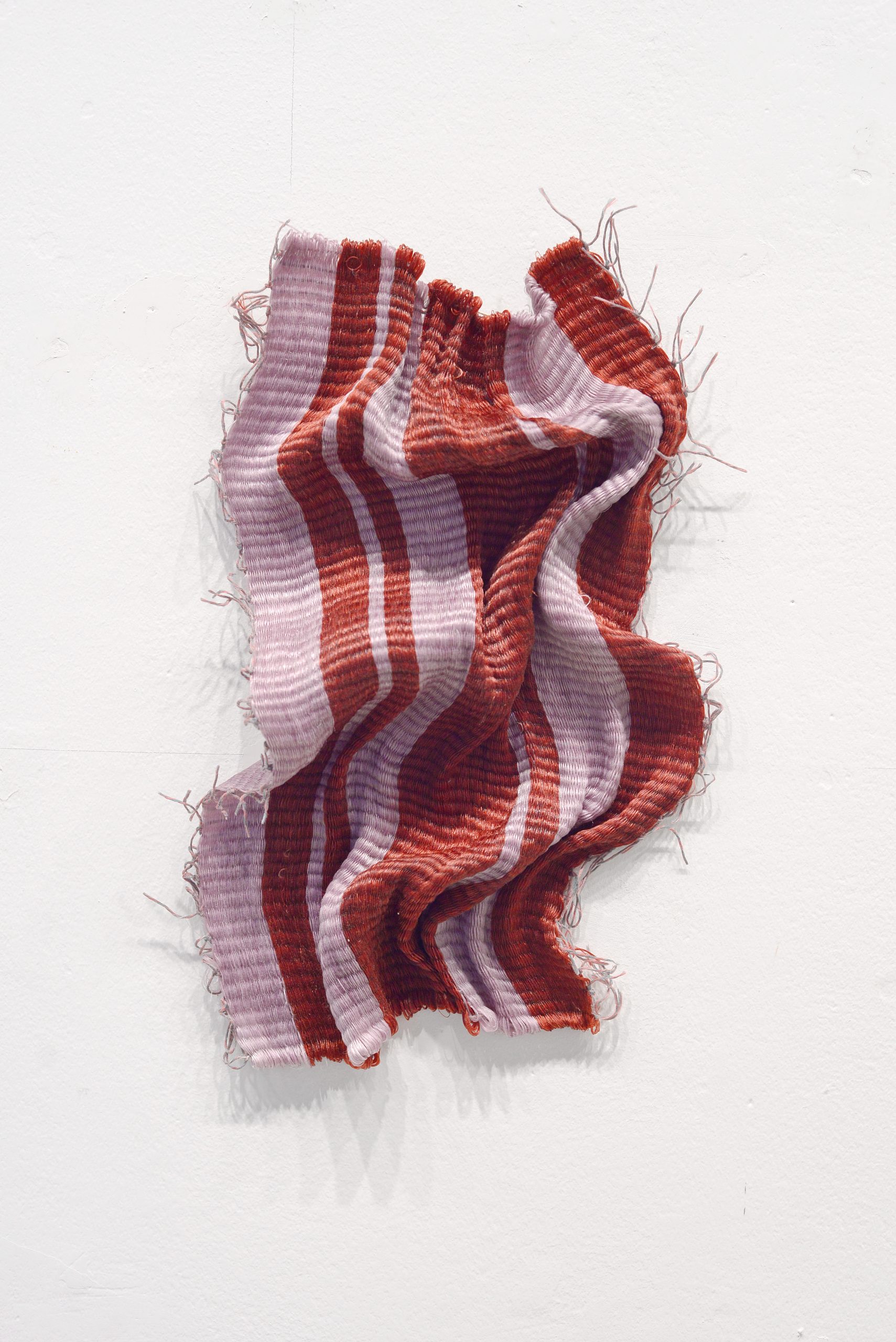 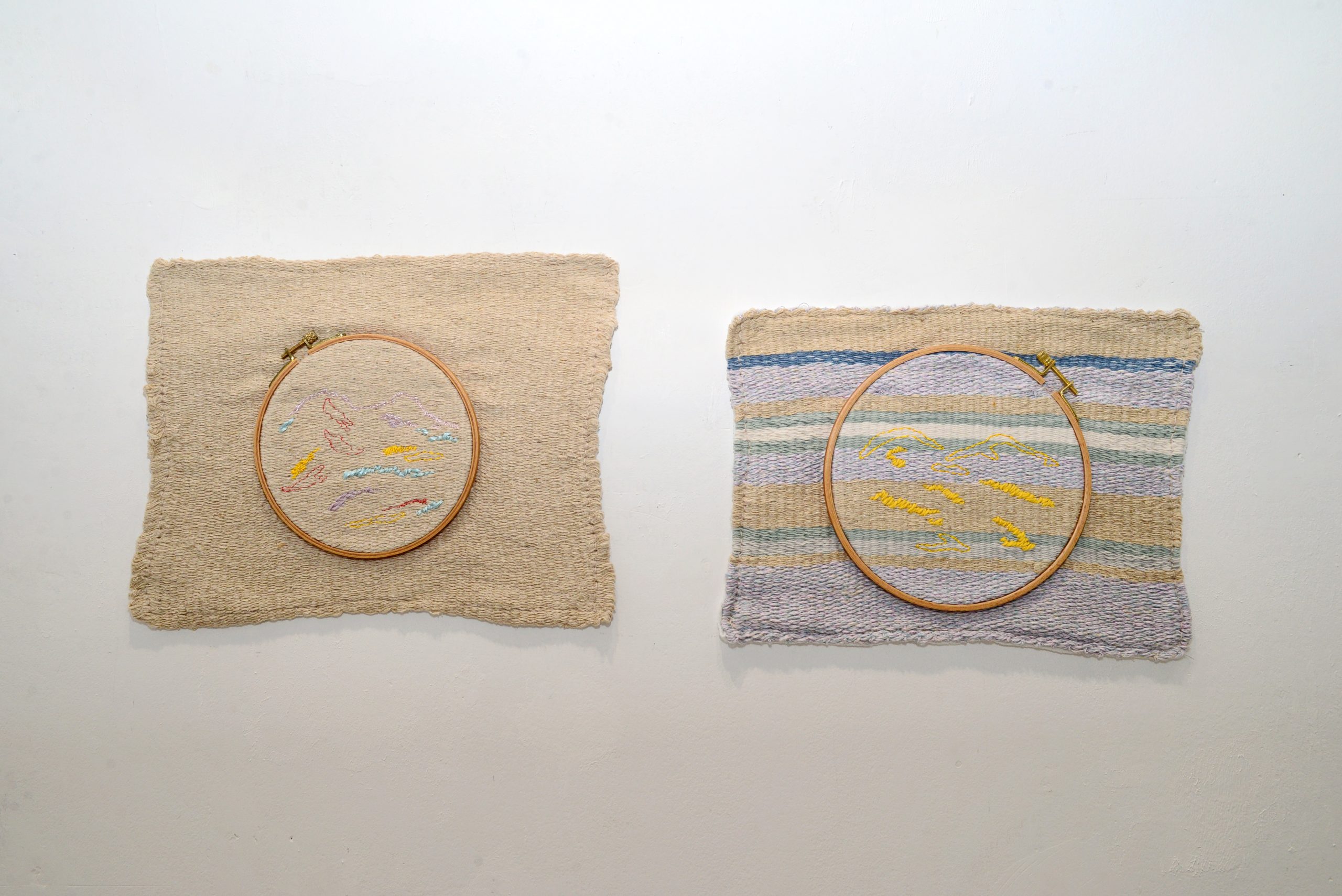 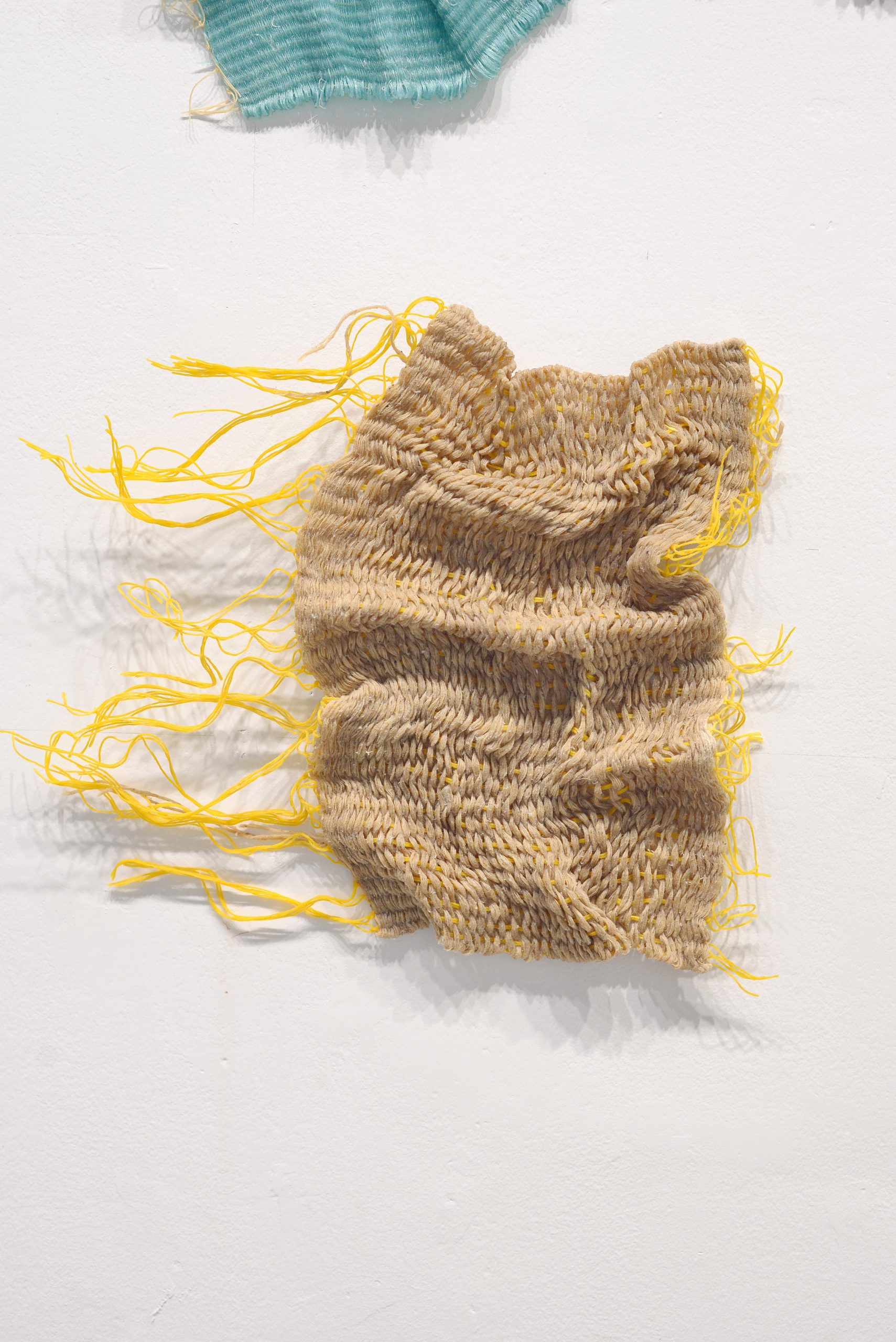 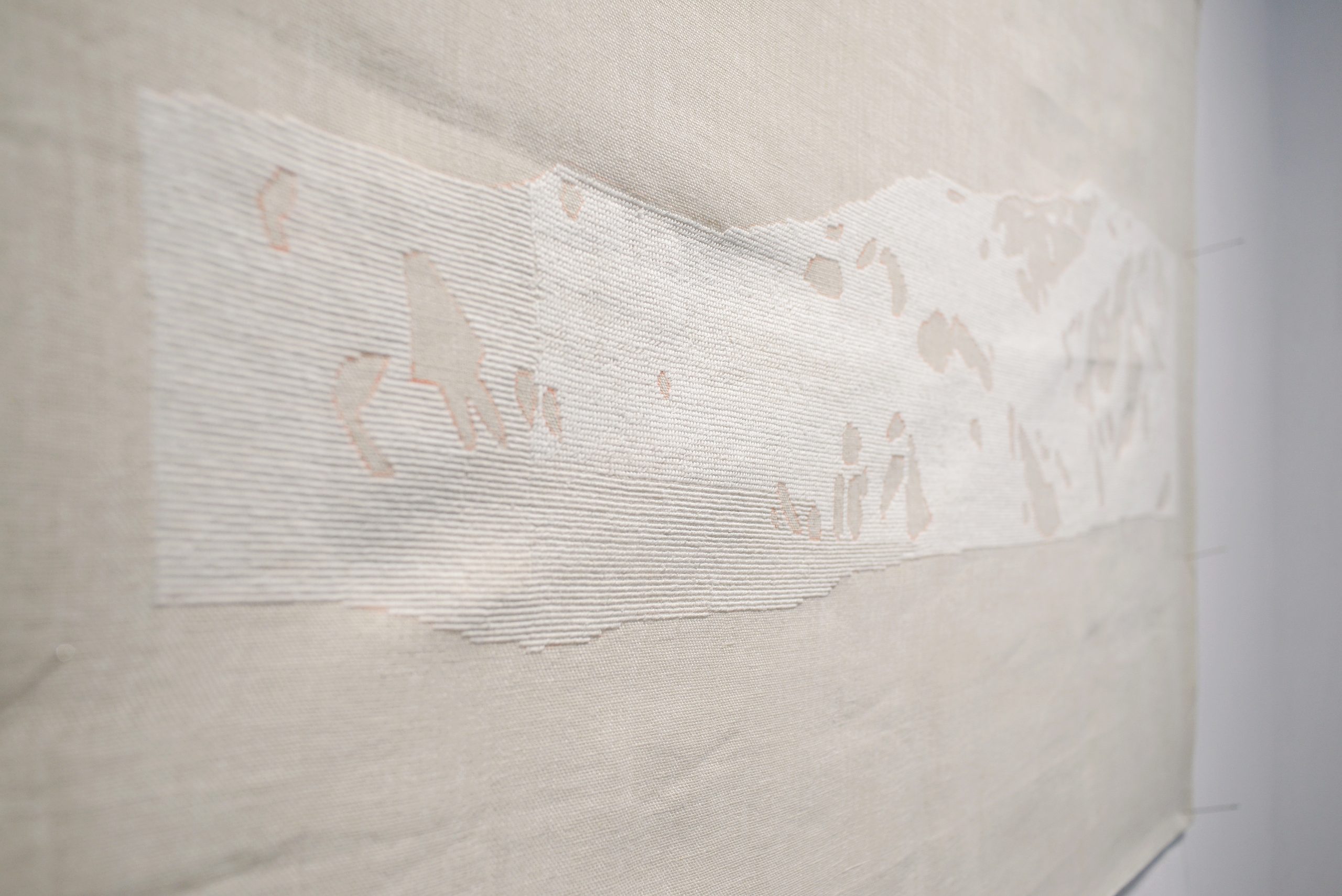 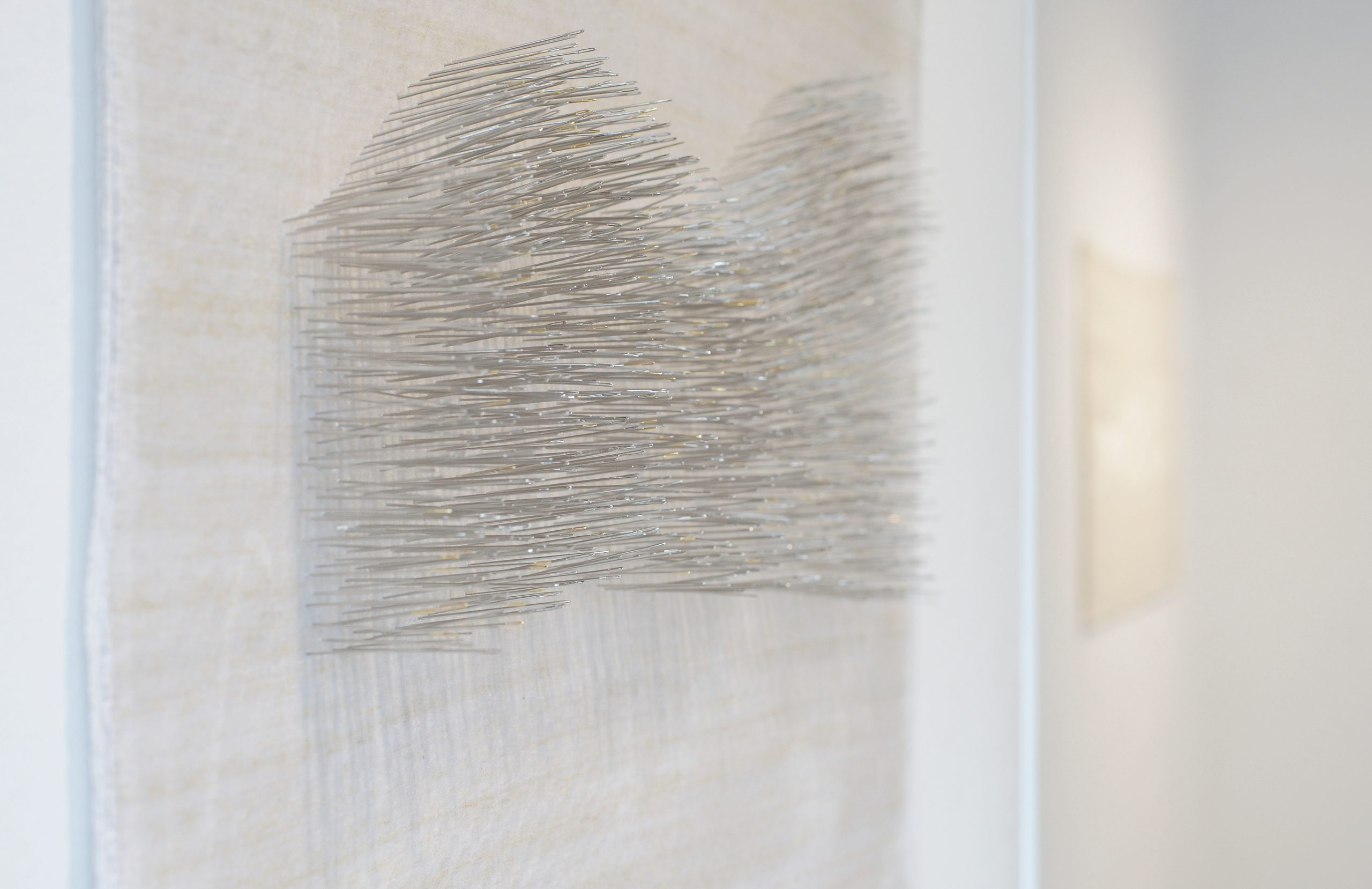 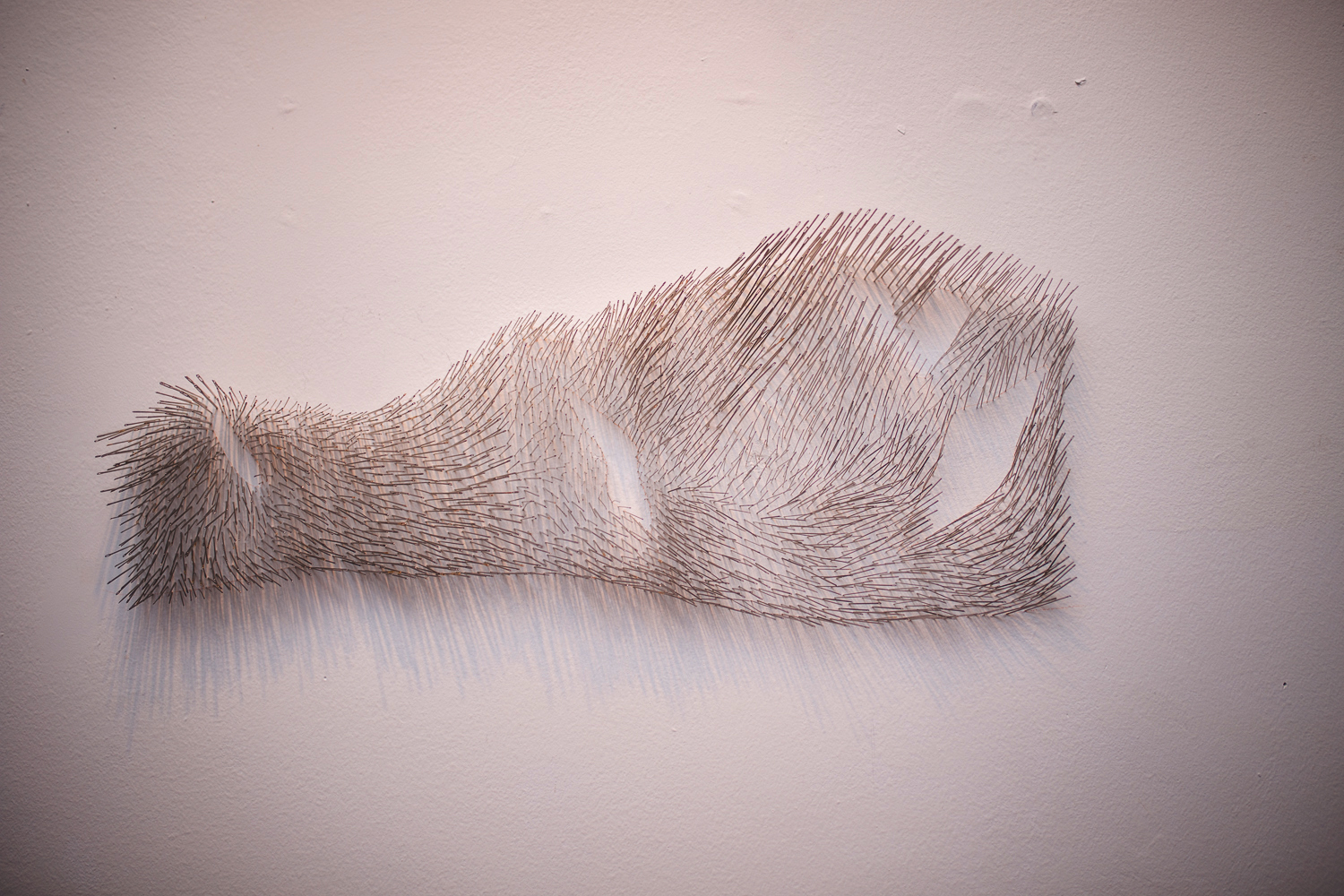 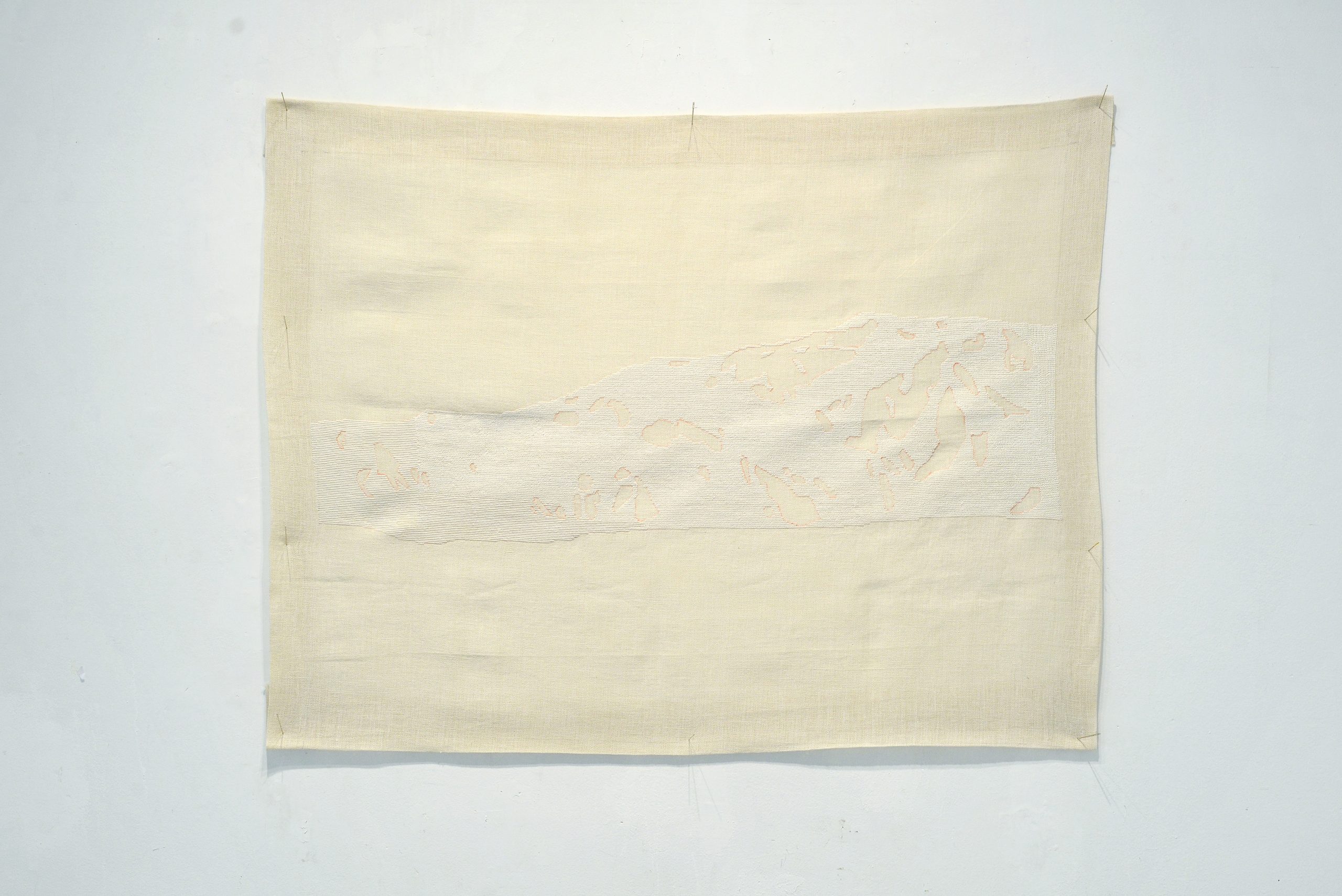 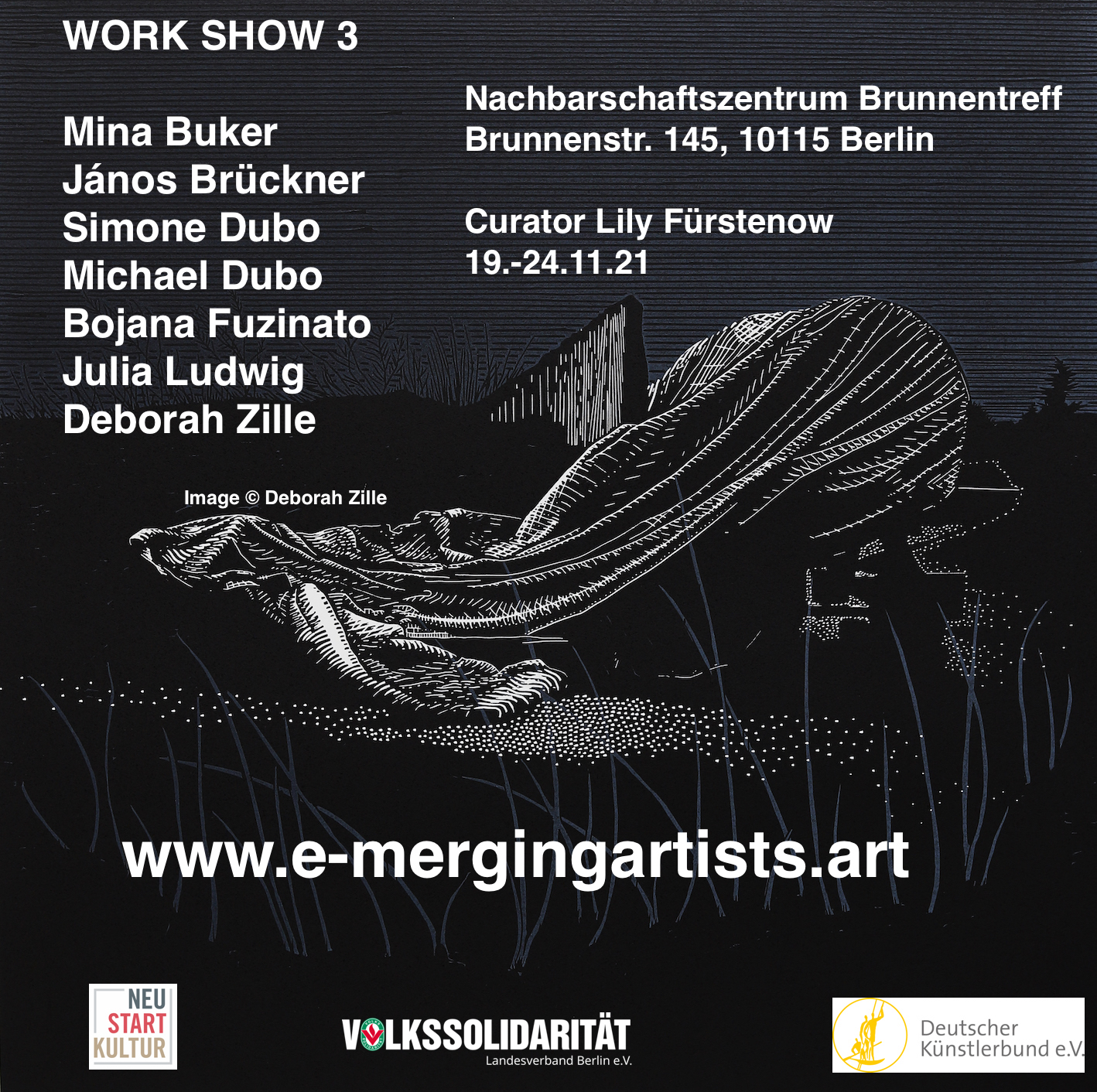 Soft sculpture 2021
Can we be aware of the line between private and public activity in our lives? Is that harder if the subject is the one who creates? Weaving in her room, did my grandmother ever think that by creating that piece of material on the loom, her life would go from a private to a public one (inaccessible to her at the time)? By transposing a piece of textile that I weave by hand into an object titled installation in space, I break through the thin line between the private and the public. I make the soft structure of the fabric stop, freezing it, making it hard as stone, so that the outside view can feel how it slides under my fingers, rounded and tender. The production of material on the loom is a very intimate physical moment in which energy moves harmoniously through our body and by repeating the same procedures produces a rhythmic sound with which thoughts relax. The procedure can be viewed as meditative, cathartic, but very private and intimate. Observed throughout history, weaving has been the product of those who spend most of their time at home, who take care of the family and mostly women’s work. For a long time, it had the characteristic of decorative art, the one that is less valuable compared to the art produced by the big names in art history, done mostly by the male gender. As a craft or decorative art, weaving remained in the intimate zone. With its softness, colors, seductive charm, we read it as a woman’s energy. When I shape such energy and publicly present it into an object, it becomes a political act. It suggests a vague line of her private and public actions, a life full of content and obligations, a departure from flexibility, and as such contextualized through an artistic act. The contemporary artist is in a very confusing situation today. Their lives are permeated with ambiguity about profession, private life and acting in both. It is very difficult as an artist to be constantly flexible and to continue with many different activities we do. In Bojana Kunst’s book “Artist at Work”, the author sets a modern artist as a prototype of modern flexibility and precarious work. It is precisely the absence of lines between the personal and the public that makes a work of art so close to the creation of life itself. Bojana Kunst further states: “Today, the vanishing dividing line between life and work, placed by many twentieth-century artists at the core of their emancipation tendencies is also at the center of the capitalist processes of life exploitation. It often seems that the artist is the ideal worker in contemporary capitalism; it is also no coincidence that the artistic lifestyle and exploitation of life as an endless creative process underlies the speculation on the future value of art.”

“It’s easy to be …”
-Visual reflection on public and private, in the hilly and rural parts of the Balkans

A series of works “Virginia” as a synthesis of different elements, made through many years of research on the mentioned concept / Virginia, Tobelia, Sworn Virgins /, in the period from 2016 to 2021.
“It’s easy to be a man, and being a woman is hard,” is the line pronounced by Hajdar, one of the oldest Virgin in Northern Albania, in the documentary “Last Balkan Virgin” produced by Vice Serbia. The first time I heard about the term“Virdžina”(Virgin) was at the end of the last century, in a film directed by Srdjan Karanovic, filmed in 1991 in Yugoslavia. The story describes Stevan, a young heir to the family cursed by the fact that there are too many female offspring. Stevan’s own family condemns him to live as a boy, although he was born as a girl. His family is actually following the custom of “swearing virgins” (“virgin” or “tobelia”) to avoid condemnation of society because it has exclusively female offspring. There are various reasons for becoming Virginia, and Stevans case from the abovementioned film is just one of them. It can also be from purely personal incentives, when young girls do not have the identity of the sex and the gender with which they were born. Also, there are some cases where grieving for a lost partner, women took the vow to be Virgin, so they could escape potential arranged and unwanted marriage. In this way, they commit themselves to eternal virginity, which separates them from the category of the woman, does not include them into the category of a man, but certainly creates the possibility of permanent exclusion from the obligation to be a woman. With the status of Virginia, women are certainly gaining freedom of movement in a public domain, but not so much in a private, hidden area of women’s life. In all these cases, I analyze the patriarchal situation in the mountainous rural areas of the Balkans: Northern Albania, Kosovo and Montenegro, where the Virdžina phenomenon is still present. Written documents testify that the existence of a phenomenon dates back to the 1860, and in a recent Vice documentary we can see that there are still Virdžinas, of course in a much smaller number than before, and that they represent the oldest third gender in Europe. The visual vocabulary that I use to transpose this phenomenon in visual speech uses elements that symbolically depict the private and public domain in the life of a woman / man / Virgin. It is based on the motifs of the mountain parts of the Balkans, as a symbol of the public and free movement. As a reflection of the way of life in remote places and the patriarchate that is still present in them. The chosen motif is portrayed on a media that is traditionally related to women’s handicrafts and the private sphere of her life: embroidery, sewing, batik painting textiles, decorative painting of fabrics, needles and kitchen cloths. Thus, these two areas intertwine, blur and postulate the gender and gender positions, which in the case of Virginia are socially constructed.

(In this text I am using the information found in the scientific works Suzana Milevski, Predrag Šarčević and Marko Kokotec, Virdžina films Srđan Karanović and “The Last Balkan Virginia” Vice Serbia)

My name is Bojana Fužinato /Stamenković, I was born on 2 April 1986 in Čačak, Serbia. Since the beginning of 2019 I’m working and living in Hamburg, Germany with my partner Toni and our son Orion.
From 2014 until the end of 2018 I have been working and living in Vienna, Austria. I’m a visual artist, cultural worker, and activist in the field of women’s rights and cultural awakening in underdeveloped areas. 2019 I finished the post-graduate Master’s Program ecm — educating/curating/managing at the University of Applied Arts Vienna, and also worked there for four years in the management team. 2019/ 2020 I sudied Digital feminist School at the Center for Women’s Studies at the Faculty of Political Sciences. From the beginning of the 2018, I was part of the team das weisse haus artist space in Vienna, at the curatorial position Graduates — a scholarship program for exhibition organizers, which is accomplished with the generous support ofPhileas – A Fund for Contemporary Art.

Since 2012 I’ve also been a PhD student at the University of Arts in Belgrade, focusing on a

participatory feminist project in the field of visual arts. One intensive output I received was at the International Summer Academy Salzburg in 2009 with training in the field of performances and video art, within the workshop-media-installation-performance in the class of Prof. Gulsun Karamustafa, where I received a grant from KulturKontakt Austria. Two years after this program I received a scholarship and went to the photography workshop at the Summer Academy program in Traunkirchen with the artist Eva Schlegel. With my colleague Jelena Fužinato (BiH, Berlin) I founded the artistic group Rouge in 2011, in which we examine the issues of gender, the status of women, identity, and the field of labor migration. We both graduated from the Faculty of Fine Arts in Belgrade, the Department of Painting, with a graduation project in the field of contemporary visual practices, both of us with very striking feminist themes in ours works, which led to us working together.